***HIGHLY RECOMMEND** When i began my project I contacted over 20 contractors, of that only a handful called me back, only 3 actually came to my house and only 2 produced an estimate. Obviously Total was one of those 2 and the only one that did all of this in a professional manner in a reasonable timeframe. Having done my due diligence the estimate came in right where I was expecting. Once we worked through the process of picking everything out, ordering it and the supplies arrived, they were at my house daily getting the work done. There were a couple bumps along the way, my house, after all is over 100 years old but they were worked out relatively easily. I have heard countless contractor horror stories but I have none to share. I kept in constant communication with Kevin, the owner of the firm, via email and text, we talked on the phone when needed and he even came out in person a couple times. The office folks were fantastic, humorous, and responsive. All of the craftsmen who worked on the project were friendly, respectful and skilled. Steve, oversaw the project and is a man of many trades - master of all, his standards were even even more exacting then my own. When the project was finished, I was blown away by the final results, my kitchen looks amazing and everyone who sees it ooh and ahhs. We have a bathroom remodel coming up next and I will utilize Total again. I have no reservations in urging you to contact them for any repair, remodel, or new construction projects you are planning.

Right before Christmas 2021, 90 mile an hour winds blew over a huge tree into my house. Total construction put my crushed little house back together again. The roof, gutters, corbels, and stucco are all repaired. A big shout out to their worker Zach, who went above and beyond!

The people at Total construction are awesome. I bought a window and install from another company, but when it came to actually install it there was an issue and they could not finish the install. So I called Total Construction and they knew what to do, and they did it professionally, cleanly and quickly. Very satisfied.

Had a tile wall/floor replaced after a new sink was put in. As in a previous experience with another house all was good until it wasn't. The work was done well on the floor and wall, however the sink fell off the wall almost immediately after the gentleman left. To their credit they did come back within 30 minutes and fixed it. (Owner himself made good on the other house). Lovely folks to work with, Took awhile to actually get it started and done but considering the employment market, being shorthanded is impeding many many businesses.

I have never been more disgusted with a company and its owner, (Kevin) It took just over 2 years for them to break ground on our project, thanks to the lying estimator Chris. The fact that an owner could be unaware of this project and just let it sit for that long without questioning it is beyond me. Once they started work they said it would be an 8 to 12 week job, it took almost 6 months. Not to mention when they started the work, they had a permit to break ground and we were told all was good with what we wanted. Turned out, that was completely false. Nothing was built the way we thought it would be. We were told one thing then got a call after they started saying the city would not allow it. So we were stuck since the work had already began. When things were going Kevin's way in the beginnig things seemed ok, but when we started noticing issues he became unresponsive and when he did respond he was rude and hostile. It was a terrible experience, so incredibly stressful for my husband and i, and I would never recommend using this company. Side note, I've looked through some of these other reviews and I'm always suspicious of people that give 5 stars to a company that have only reviewed them and no one else. I saw at least 6 reviews where total was the only company they reviewed. And Total Construction has only replied to my review on the BBB, saying they want to sit down and talk, that we have a outstanding balance, and they apologize to us and say they want us to be pleased with their work. That is what I call narcissistic behavior. They will respond to a BBB review but won't call us... not to mention they were given a packet of pics and a statement of everything that happened. I have included just some of the pics of things we have had to deal with and we had to ask them to correct these things. When we did show concern, we were not met with kindness and apologizes from Kevin, it was frustration and annoyance. 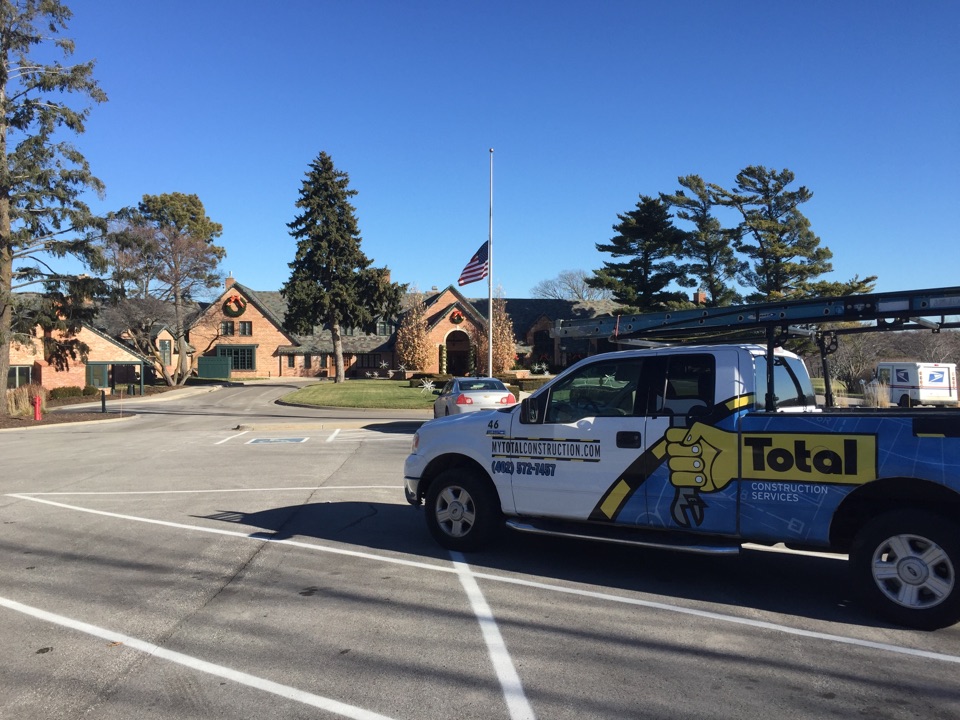